This approach places the emphasis on models, provides a higher level of abstraction during development, and enables significant decoupling between platform-independent models (PIM) and platform-specific models (PSM).

Of particular importance to model-driven architecture are the notions of metamodel and model transformation. Metamodels are defined at the OMG using the MOF (Meta Object Facility) standard. A specific standard language for model transformation called QVT has been defined by OMG. The OMG has also defined a model interchange mechanism based on XML called XMI. 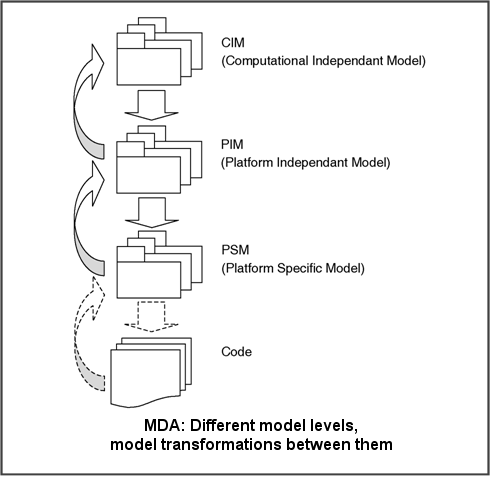 Industrial implementations of MDA are mainly based on the UML standard and on the UML Profile mechanism. This mechanism provides the following advantages:

One notable MDA implementation is the EMF (Eclipse Metamodel Framework) tool. This tool is widely used by research projects and provides a good means of quickly supporting a metamodel. However, EMF does not scale up for large models, does not provide any workgroup support, and is generally not used as a basis for industrial tools. EMF does not fully comply with the MOF standard. Modelio supports a dedicated XMI for EMF import or export.

The model transformation language standardized by the OMG (QVT) cannot be called a success. It has no complete implementation, no industrial strong support and is not frequently used. Other transformation languages such as ATL (opensource) have had more success. However, some of these languages have interesting features, but are far from the quality of well established 3G languages such as Java or C#: a well defined organization, efficient tool support and implementation, debug capacities, rich set of libraries, and so on. Using these languages may quickly lead to maintenance, performance or scaling issues.

Since 1989, Modelio has been conducting research and development into model-driven engineering, providing a tool supporting this approach since 1991. A specific technology named "hypergenericity", first published in a book entitled "Object Engineering – The Fourth Dimension", Addison Welsey in 1994, has since evolved to integrate and enhance the UML profile technology. UML profiles are now part of the OMG UML standard, and will be improved in the UML 2.0 standard.

These improvements will be close to the UML profile improvements that Modelio has been implementing in the Objecteering/UML CASE tool since 1994. Since this time, Modelio has gained in experience, constantly providing an ever-improving toolset and range of consultancy services, designed to supply the customer with dedicated MDA approaches and implementations. Based on UML, UML profiles and the Objecteering/UML Profile Builder toolset, this technology is now mature and has been applied to several hundreds of projects.

The Modelio tool provides a large set of features to support MDA:

With these capacities, users have a highly efficient tool for implementing their MDA approaches. They have all the power of Java and the Modelio metamodel and libraries, but can also connect this to other transformation engines such as template based model to text transformers.